Aegina is the biggest island among the Saronic ones and is singled out for the many different and interesting things that it may offer to its visitors.

It’s rich history and archeological and architectural landmarks give breath taking impression on visitors with exquisite taste for culture, history and beauty.

Along with its wonderful pistachio grove and olive tree landscapes, as well as with the numerous charming fishing villages and quiet golden beaches make it one of the favorite destinations among the Greek Islands. 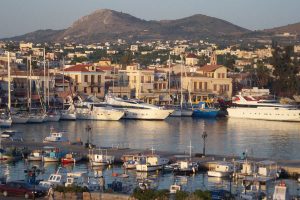 An extinct volcano constitutes two thirds of Aegina. The northern and western sides consist of stony but fertile plains, which are well cultivated and produce luxuriant crops of grain, with some cotton, vines, almonds, olives and figs, but the most characteristic crop of Aegina today (2000s) is pistachio. Economically, the sponge fisheries are of notable importance. The southern volcanic part of the island is rugged and mountainous, and largely barren. Its highest rise is the conical Mount Oros (531 m) in the south, and the Panhellenian ridge stretches northward with narrow fertile valleys on either side.

The beaches are also a popular tourist attraction. Hydrofoil ferries from Piraeus take only forty minutes to reach Aegina; the regular ferry takes about an hour, with ticket prices for adults within the 4–15 euro range. There are regular bus services from Aegina town to destinations throughout the island such as Agia Marina. Portes is a fishing village on the east coast.

Hydra
Our vessel remains in port for about 1 hour 55 minutes with time to leisurely explore the island. You can enjoy our Walking Tour of the island to discover its castles and forts, historic landmarks, quaint narrow streets and artistic shops.

Poros
The stay on Poros is 50 minutes with enough time to discover the island’s beautiful sandy beaches and the town highlighted by the architecture of the city hall, Municipal Library, museum, cultural center and characteristic small, white-washed houses of the island. The highlight is the Clock Tower built on the island’s highest point.

Aegina
The stay on Aegina is 2 hours so you explore its rich history, archaeological and architectural landmarks – and allow plenty of time to enjoy the island’s famous pistachio sweets in a cafe along the beautiful port.

ANNA 2 is a beautiful and rugged cruiser, 31 meters long, built in 1991. It develops speeds of up to More info
Book now
x
x
Translate »
We use cookies to ensure that we give you the best experience on our website. If you continue to use this site we will assume that you are happy with it.Ok