Ancient Corinth was one of the largest and most important cities of Greece, with a population of 90,000 in 400 BC.[1] The Romans demolished Corinth in 146 BC, built a new city in its place in 44 BC, and later made it the provincial capital of Greece.

According to Hellenic myth, the city was founded by Corinthos, a descendant of the god Helios (the Sun). However, other myths suggest that it was founded by the goddess Ephyra, a daughter of the Titan Oceanus, thus the ancient name of the city (also Ephyra). There is evidence that the city was destroyed around 2000 BC.

Some ancient names for the place are derived from a pre-Greek “Pelasgian” language, such as Korinthos. It seems likely that Corinth was also the site of a Bronze Age Mycenaean palace-city, like Mycenae, Tiryns, or Pylos. According to myth, Sisyphus was the founder of a race of ancient kings at Corinth. It was also in Corinth that Jason, the leader of the Argonauts, abandoned Medea. During the Trojan War, as portrayed in the Iliad, the Corinthians participated under the leadership of Agamemnon.

In a Corinthian myth recounted to Pausanias in the 2nd century AD, Briareus, one of the Hecatonchires, was the arbitrator in a dispute between Poseidon and Helios, between the sea and the sun. His verdict was that the Isthmus of Corinth belonged to Poseidon and the acropolis of Corinth (Acrocorinth) belonged to Helios. Thus, Greeks of the Classical age accounted for the archaic cult of the sun-titan in the highest part of the site.

The Upper Peirene spring is located within the walls of the acropolis. “The spring, which is behind the temple, they say was the gift of Asopus to Sisyphus. The latter knew, so runs the legend, that Zeus had ravished Aegina, the daughter of Asopus, but refused to give information to the seeker before he had a spring given him on the Acrocorinthus.” (Pausanias, 2.5.1). 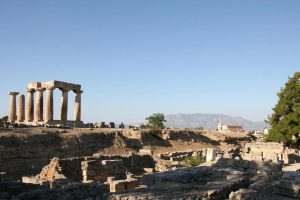 Cypselus or Kypselos (Greek: Κύψελος) was the first tyrant of Corinth in the 7th century BC. From 658–628 BC, he removed the Bacchiad aristocracy from power and ruled for three decades. He built temples to Apollo and Poseidon in 650 BC.

Aristotle reports that "Cypselus of Corinth had made a vow that if he became master of the city, he would offer to Zeus the entire property of the Corinthians. Accordingly, he commanded them to make a return of their possessions."

The city sent forth colonists to found new settlements in the 7th century BC, under the rule of Cypselus (r. 657–627 BC) and his son Periander (r. 627–585 BC). Those settlements were Epidamnus (modern day Durrës, Albania), Syracuse, Ambracia (modern day town of Lefkas), Corcyra (modern day town of Corfu), and Anactorium. Periander also founded Apollonia in Illyria (modern day Fier, Albania) and Potidaea (in Chalcidice). Corinth was also one of the nine Greek sponsor-cities to found the colony of Naukratis in Ancient Egypt, founded to accommodate the increasing trade volume between the Greek world and pharaonic Egypt during the reign of Pharaoh Psammetichus I of the 26th dynasty.