Argos is a city in Argolis, the Peloponnese, Greece and one of the oldest continuously inhabited cities in the world. It is the biggest town in Argolis and a major center for the area.

Since the 2011 local government reform it has been part of the municipality of Argos-Mykines, of which it is a municipal unit. The municipal unit has an area of 138.138 km2. It is 11 kilometres (7 miles) from Nafplion, which was its historic harbour. A settlement of great antiquity, Argos has been continuously inhabited as at least a substantial village for the past 7,000 years. The city is a member of the Most Ancient European Towns Network.

A resident of the city of Argos is known as an Argive. However, this term is also used to refer to those ancient Greeks generally who assaulted the city of Troy during the Trojan War; the term is more widely applied by the Homeric bards.

Numerous ancient monuments can be found in the city today, the most famous of which is the Heraion of Argos and the Larisa castle. Agriculture is the mainstay of the local economy. 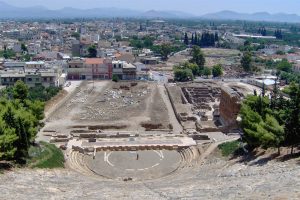 As a strategic location on the fertile plain of Argolis, Argos was a major stronghold during the Mycenaean era. In classical times Argos was a powerful rival of Sparta for dominance over the Peloponnese, but was eventually shunned by other Greek city-states after remaining neutral during the Greco-Persian Wars.

There is evidence of continuous settlement in the area starting with a village about 7000 years ago in the late Neolithic, located on the foot of Aspida hill. Since that time, Argos has been continually inhabited at the same geographical location. Its creation is attributed to Phoroneus, with its first name having been Phoronicon Asty, or the city of Phoroneus. The historical presence of the Pelasgian Greeks in the area can be witnessed in the linguistic remainders that survive up to today, such as the very name of the city and "Larisa", the name of the city's castle located on the hill of the name.

The city is located at a rather propitious area, among Nemea, Corinth and Arcadia. It also benefitted from its proximity to lake Lerna, which, at the time, was at a distance of one kilometre from the south end of Argos. During the Dorian invasion, c. 1100 BC, Argos was divided into four neighbourhoods, each of them inhabited by a different phyle.

Argos was a major stronghold of Mycenaean times, and along with the neighbouring acropolis of Mycenae and Tiryns became a very early settlement because of its commanding positions in the midst of the fertile plain of Argolis. Argos experienced its greatest period of expansion and power under the energetic 7th century BC ruler King Pheidon. Under Pheidon, Argos regained sway over the cities of the Argolid and challenged Sparta’s dominance of the Peloponnese. During this time of its greatest power, the city boasted a pottery and bronze sculpturing school, pottery workshops, tanneries and clothes producers. Moreover, at least 25 celebrations took place in the city, in addition to a regular local products exhibition. A sanctuary dedicated to Hera was also found at the same spot where the monastery of Panagia Katekrymeni is located today.

Argos remained neutral or the ineffective ally of Athens during the 5th century BC struggles between Sparta and Athens. This, however, led to its weakening and loss of power, which in turn led to the shift of commercial focus from the Ancient Agora to the eastern side of the city, delimited by Danaou and Agiou Konstadinou streets.