Athens Modern Greek is the capital and largest city of Greece. It dominates the Attica region and is one of the world’s oldest cities, with its recorded history spanning over 3,400 years, and its earliest human presence starting somewhere between the 11th and 7th millennia BC.

Classical Athens was a powerful city-state that emerged in conjunction with the seagoing development of the port of Piraeus, which had been a distinct city prior to its 5th century BC incorporation with Athens. A centre for the arts, learning and philosophy, home of Plato’s Academy and Aristotle’s Lyceum, it is widely referred to as the cradle of Western civilization and the birthplace of democracy, largely because of its cultural and political impact on the European continent, and in particular the Romans. In modern times, Athens is a large cosmopolitan metropolis and central to economic, financial, industrial, maritime, political and cultural life in Greece.

Athens is recognised as a global city because of its location and its importance in shipping, finance, commerce, media, entertainment, arts, international trade, culture, education and tourism. It is one of the biggest economic centres in southeastern Europe, with a large financial sector, and its port Piraeus is both the largest passenger port in Europe and the second largest in the world. The municipality (city) of Athens had a population of 664,046 (in 2011) within its administrative limits, and a land area of 38.96 km2 (15.04 sq mi). The urban area of Athens (Greater Athens and Greater Piraeus) extends beyond its administrative municipal city limits, with a population of 3,090,508 (in 2011) over an area of 412 km2 (159 sq mi). According to Eurostat in 2011, the Functional urban areas (FUA) of Athens was the 9th most populous FUA in the European Union (the 6th most populous capital city of the EU), with a population of 3,828,000. Athens is also the southernmost capital on the European mainland. 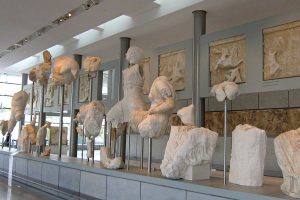 The oldest known human presence in Athens is the Cave of Schist, which has been dated to between the 11th and 7th millennia BC. Athens has been continuously inhabited for at least 7000 years.

By 1400 BC the settlement had become an important centre of the Mycenaean civilization and the Acropolis was the site of a major Mycenaean fortress, whose remains can be recognised from sections of the characteristic Cyclopean walls.

Unlike other Mycenaean centers, such as Mycenae and Pylos, it is not known whether Athens suffered destruction in about 1200 BC, an event often attributed to a Dorian invasion, and the Athenians always maintained that they were "pure" Ionians with no Dorian element.

However, Athens, like many other Bronze Age settlements, went into economic decline for around 150 years afterwards.