The Heraion of Perachora was a sanctuary of the goddess Hera situated in a small cove of the Corinthian gulf at the end of the Perachora peninsula.

In addition to a temple of Hera of unusual construction and antiquity, the remains of a number of other structures have also been found, including a L-shaped stoa, a large cistern, dining rooms, and a second potential temple.

Although there is debate between Argos, Megara and Corinth, the sanctuary was probably under the control of Corinth, as it faced the harbors of that powerful city across the Corinthian gulf.

Cult activity at the site continued from perhaps the 9th century BCE to 146 BCE, when the Roman general Mummius sacked Corinth during the war with the Achaean League.

In the Roman period, domestic structures were built on the site, indicating that the area was no longer a sanctuary. This site is significant for the study of the origins of Greek temple architecture and rural cults. 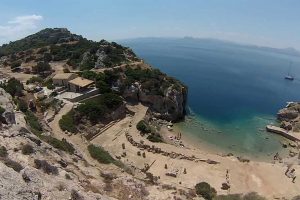 There is a legend recounted in Euripides that Medea buried her murdered children at a sanctuary of Hera Akraia as she fled from Corinth.

This may be a reference to this site. Herodotus tells the story of Periander stripping the clothes off of the Corinthian women at a sanctuary of Hera.

In the 1st century CE, the Greek historian Strabo wrote that there was an oracle associated with the sanctuary.