The Meteora is a rock formation in central Greece hosting one of the largest and most precipitously built complexes of Eastern Orthodox monasteries, second in importance only to Mount Athos. The six monasteries are built on immense natural pillars and hill-like rounded boulders that dominate the local area. It is located near the town of Kalambaka at the northwestern edge of the Plain of Thessaly near the Pineios river and Pindus Mountains.

Beside the Pindos Mountains, in the western region of Thessaly, these unique and enormous columns of rock rise precipitously from the ground. But their unusual form is not easy to explain geologically. They are not volcanic plugs of hard igneous rock typical elsewhere, but the rocks are composed of a mixture of sandstone and conglomerate.

The conglomerate was formed of deposits of stone, sand and mud from streams flowing into a delta at the edge of a lake, over millions of years. About 60 million years ago during the Paleogene period a series of earth movements pushed the seabed upwards, creating a high plateau and causing many vertical fault lines in the thick layer of sandstone. The huge rock pillars were then formed by weathering by water, wind and extremes of temperature on the vertical faults. It is unusual that this conglomerate formation and type of weathering are confined to a relatively localised area within the surrounding mountain formation.

This type of rock formation and weathering process has happened in many other places locally and throughout the world, but what makes Meteora’s appearance special is firstly the uniformity of the sedimentary rock constituents deposited over millions of years leaving few signs of vertical layering, and secondly the localised abrupt vertical weathering. 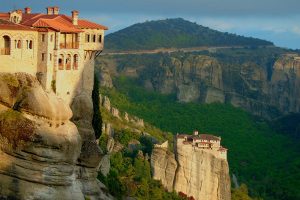 Caves in the vicinity of Meteora were inhabited continuously between 50,000 and 5,000 years ago. The oldest known example of a man-made structure, a stone wall that blocked two-thirds of the entrance to the Theopetra cave, was constructed 23,000 years ago, probably as a barrier against cold winds – the Earth was experiencing an ice age at the time – and many Paleolithic and Neolithic artifacts have been found within the caves.

As early as the 11th century, monks occupied the caverns of Meteora. However, monasteries were not built until the 14th century, when the monks sought somewhere to hide in the face of an increasing number of Turkish attacks on Greece. At this time, access to the top was via removable ladders or windlass. Nowadays, getting up is a lot simpler due to steps being carved into the rock during the 1920s. Of the 24 monasteries, only 6 (five male, one female) are still functioning, with each housing fewer than 10 individuals.

The cave of Theopetra is located 4 kilometres (2.5 mi) from Kalambaka. Its uniqueness from an archeological perspective is that a single site contains records of two greatly significant cultural transitions: the replacement of Neanderthals by modern humans and later, the transition from hunting-gathering to farming after the end of the last Ice Age. The cave consists of an immense 500 square metres (5,400 sq ft) rectangular chamber at the foot of a limestone hill, which rises to the northeast above the village of Theopetra, with an entrance 17 metres (56 ft) wide by 3 metres (9.8 ft) high. It lies at the foot of the Chasia mountain range, which forms the natural boundary between Thessaly and Macedonia prefectures, while the Lithaios River, a tributary of the Pineios River, flows in front of the cave. The small Lithaios River flowing literally on the doorsteps of the cave meant that cave dwellers had always easy access to fresh, clean water without the need to cover daily long distances to find it. Excavations and research and have discovered petrified diatoms, which have contributed to understanding the Palaeo-climate and climate changes. Radiocarbon dating evidences human presence dating back 50,000 years. The cave is open to the public.