Mycenae is an archaeological site in Greece, located about 90 kilometres (56 miles) southwest of Athens, in the north-eastern Peloponnese. Argos is 11 kilometres (7 miles) to the south; Corinth, 48 kilometres (30 miles) to the north. From the hill on which the palace was located, one can see across the Argolid to the Saronic Gulf.

In the second millennium BC, Mycenae was one of the major centres of Greek civilization, a military stronghold which dominated much of southern Greece. The period of Greek history from about 1600 BC to about 1100 BC is called Mycenaean in reference to Mycenae. At its peak in 1350 BC, the citadel and lower town had a population of 30,000 and an area of 32 hectares.

The first correct identification of Mycenae in modern literature was during a survey conducted by Francesco Grimani, commissioned by the Provveditore Generale of the Kingdom of the Morea in 1700, who used Pausanias’s description of the Lion Gate to identify the ruins of Mycenae. 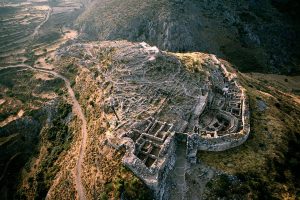 Pottery material spanning the entire EHI through EHIII period was discovered in 1877–1878 by Stamatakis at a low depth in the sixth shaft grave in Grave Circle A; further EH and MH material was found beneath the walls and floors of the palace, on the summit of the acropolis, and outside the Lion Gate in the area of the ancient cemetery.

An EH–MH settlement was discovered near a fresh-water well on top of the Kalkani hill southwest of the acropolis.

The first burials in pits or cist graves manifest in the MH period (circa 1800–1700 BC) on the west slope of the acropolis, which was at least partially enclosed by the earliest circuit wall.