Poros is an island with rich history, archaeological and cultural heritage, a prime gem stone among the Greek islands.

Poros is separated from the mainland of Peloponnese by a narrow sea channel, and its protected setting makes the main settlement of Poros Town seem like a cheery lakeside resort. Its pastel-hued houses stack up the hillside to a clock tower, the Neoclassical architecture and the lovely port, makes a vibrant first impression. 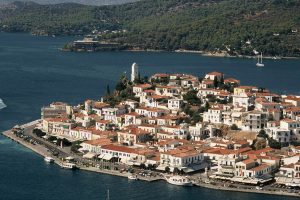 The ancient polis of Kalaureia was home to an asylum dedicated to Poseidon, the ruins of which are still accessible on a hilltop close to the town. This asylum may have been linked to the sanctuaries at Geraistos and Tainaros. Ancient historians claimed that Poros was home to an Amphictyony in the Archaic period, a league of the poleis Poros, Athens, Prassiai, Aegina, Epidaurus, Hermione, Troizen, Nauplion and Orchomenus. However, there is no evidence for this, and modern scholars believe the Amphictyony may have been a Hellenistic invention. An enormous feast was found dating to the Hellenistic period in the ruins of the Kalaureia asylum, along with a plaque celebrating the "revival" of the Kalaureian League.

Poros was divided in two islands during the antiquity: the one was called Sfairia and is the part of the island where today is located the island’s capital; the other was called Kalavria and is the bigger part of Poros at the north of Poros Town. During the Mycenaean dominance (1400-1100 BC) Kalavria was quite powerful as the most important naval base of the wider region was located on islet Monti or Liontari in the eastern coast of Poros. In the 7th century BC, it is believed that Kalavria was part of an “amphictyonia”; that is an alliance between multiple City-states. The amphictyonia was named “Amphictionia of Kalavria” and its members were Athens, Poros, Aegina, Epidaurus, Hermione, Trizina, Nafplio, Orchomenos and Prasies. During the 5th century, the Persians started attacking the Greek territories along with the Aegean islands. With the beginning of the Peloponnesian War, which also affected the islands of the Argosaronic Gulf, Trizina and Kalavria offered asylum to the anti-Macedonian politician who eventually became the tyrant of the region. After the death of Alexander the Great in 323 BC, the Ptolemies of Egypt occupied Kalavria. Around that time, the famous orator Demosthenes came to the island and some say that this is the place where he committed suicide. In 273 BC, the last explosion of the Methana volcano dramatically changed the morphology of Poros and the wider region. The Sanctuary of Poseidon has been excavated by Swedish archaeologists, one field season in 1894 considered to be the first Swedish archaeological campaign in Greece, and continued excavations from 1997 and onwards in collaboration with the Greek National Heritage Board.[6]

Hydra
Our vessel remains in port for about 1 hour 55 minutes with time to leisurely explore the island. You can enjoy our Walking Tour of the island to discover its castles and forts, historic landmarks, quaint narrow streets and artistic shops.

Poros
The stay on Poros is 50 minutes with enough time to discover the island’s beautiful sandy beaches and the town highlighted by the architecture of the city hall, Municipal Library, museum, cultural center and characteristic small, white-washed houses of the island. The highlight is the Clock Tower built on the island’s highest point.

Aegina
The stay on Aegina is 2 hours so you explore its rich history, archaeological and architectural landmarks – and allow plenty of time to enjoy the island’s famous pistachio sweets in a cafe along the beautiful port.

Athens One Day Cruise offers you the beauty of a Greek island hopping cruise to three magnificent is More info
Book now
x
x
Translate »
We use cookies to ensure that we give you the best experience on our website. If you continue to use this site we will assume that you are happy with it.Ok