Santorini classically Thera, and officially Thira, is an island in the southern Aegean Sea, about 200 km (120 mi) southeast of Greece’s mainland. It is the largest island of a small, circular archipelago which bears the same name and is the remnant of a volcanic caldera. It forms the southernmost member of the Cyclades group of islands, with an area of approximately 73 km2 (28 sq mi) and a 2011 census population of 15,550. The municipality of Santorini includes the inhabited islands of Santorini and Therasia and the uninhabited islands of Nea Kameni, Palaia Kameni, Aspronisi, and Christiana. The total land area is 90.623 km2 (34.990 sq mi). Santorini is part of the Thira regional unit.

Santorini is essentially what remains after an enormous volcanic eruption that destroyed the earliest settlements on a formerly single island, and created the current geological caldera. A giant central, rectangular lagoon, which measures about 12 by 7 km (7.5 by 4.3 mi), is surrounded by 300 m (980 ft) high, steep cliffs on three sides. The main island slopes downward to the Aegean Sea. On the fourth side, the lagoon is separated from the sea by another much smaller island called Therasia; the lagoon is connected to the sea in two places, in the northwest and southwest. The depth of the caldera, at 400m, makes it impossible for any but the largest ships to anchor anywhere in the protected bay; there is also a fisherman’s harbour at Vlychada, on the southwestern coast. The island’s principal port is Athinios. The capital, Fira, clings to the top of the cliff looking down on the lagoon. The volcanic rocks present from the prior eruptions feature olivine, and have a small presence of hornblende.

It is the most active volcanic centre in the South Aegean Volcanic Arc, though what remains today is chiefly a water-filled caldera. The volcanic arc is approximately 500 km (310 mi) long and 20 to 40 km (12 to 25 mi) wide. The region first became volcanically active around 3–4 million years ago, though volcanism on Thera began around 2 million years ago with the extrusion of dacitic lavas from vents around the Akrotiri.

The island is the site of one of the largest volcanic eruptions in recorded history: the Minoan eruption (sometimes called the Thera eruption), which occurred some 3,600 years ago at the height of the Minoan civilization. The eruption left a large caldera surrounded by volcanic ash deposits hundreds of metres deep and may have led indirectly to the collapse of the Minoan civilization on the island of Crete, 110 km (68 mi) to the south, through a gigantic tsunami. Another popular theory holds that the Thera eruption is the source of the legend of Atlantis. 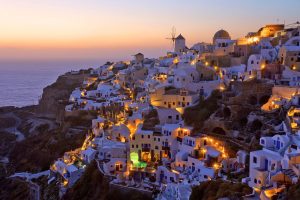 The island is the result of repeated sequences of shield volcano construction followed by caldera collapse. The inner coast around the caldera is a sheer precipice of more than 300 metres (980 ft) drop at its highest, and exhibits the various layers of solidified lava on top of each other, and the main towns perched on the crest. The ground then slopes outwards and downwards towards the outer perimeter, and the outer beaches are smooth and shallow. Beach sand colour depends on which geological layer is exposed; there are beaches with sand or pebbles made of solidified lava of various colours: such as the Red Beach, the Black Beach and the White Beach. The water at the darker coloured beaches is significantly warmer because the lava acts as a heat absorber.

The area of Santorini incorporates a group of islands created by volcanoes, spanning across Thera, Thirasia, Aspronisi, Palea, and Nea Kameni.

Santorini has erupted many times, with varying degrees of explosivity. There have been at least twelve large explosive eruptions, of which at least four were caldera-forming. The most famous eruption is the Minoan eruption, detailed below. Eruptive products range from basalt all the way to rhyolite, and the rhyolitic products are associated with the most explosive eruptions.

The earliest eruptions, many of which were submarine, were on the Akrotiri Peninsula, and active between 650,000 and 550,000 years ago. These are geochemically distinct from the later volcanism, as they contain amphiboles.

Over the past 360,000 years there have been two major cycles, each culminating with two caldera-forming eruptions. The cycles end when the magma evolves to a rhyolitic composition, causing the most explosive eruptions. In between the caldera-forming eruptions are a series of sub-cycles. Lava flows and small explosive eruptions build up cones, which are thought to impede the flow of magma to the surface. This allows the formation of large magma chambers, in which the magma can evolve to more silicic compositions. Once this happens, a large explosive eruption destroys the cone. The Kameni islands in the centre of the lagoon are the most recent example of a cone built by this volcano, with much of them hidden beneath the water.