Tripoli is a city in the central part of the Peloponnese, in Greece. It is the capital of the Peloponnese region as well as of the regional unit of Arcadia. The homonym municipality has around 47,000 inhabitants.

In the Middle Ages the place was known as Drobolitsa, Droboltsá, or Dorboglitza, either from the Greek Hydropolitsa, ‘Water City’ or perhaps from the South Slavic for ‘Plain of Oaks’. The association made by 18th- and 19th-century scholars with the idea of the “three cities” variously Callia, Dipoena and Nonacris, mentioned by Pausanias without geographical context, or Tegea, Mantineia and Pallantium, or Mouchli, Tegea and Mantineia or Nestani, Mouchli and Thana), were considered paretymologies by G.C. Miles. An Italian geographical atlas of 1687 notes the fort of Goriza e Mandi et Dorbogliza; a subsequent Italian geographical dictionary of 1827 attributes the name Dorbogliza to the ruins of Mantineia (Mandi) and states that it is located north of Tripolizza.

The Ottoman Turks referred to the town and the district as Tripoliçe. 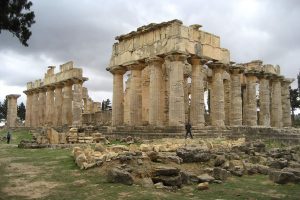 In spring 1770 during a Greek uprising known as Orlov Revolt, the revolutionary armies were halted out of Tripolitsa. As a retaliation of the Greek uprising Albanian mercenaries of the Ottomans slaughtered 3,000 Greeks in a few hours upon entering the city. Total massacre and destruction of the city was avoided after intervention of Osman bey, leader of the Albanian mercenaries.

Before the Greek War of Independence, under the Ottoman name of "Tripoliçe", it was one of the Ottoman administrative centers in the Peloponnese (the Morea Eyalet, often called "pashalik of Tripolitsa") and had large Muslim and Jewish populations. Tripolis was one of the main targets of the Greek insurgents in the Greek War of Independence, who stormed it on 17 October 1821, following the bloody Siege of Tripolitsa, and exterminated the Muslim and Jewish populations in revenge.

Ibrahim Pasha retook the city on June 22, 1825, after it had been abandoned by the Greeks. Before he evacuated the Peloponnese in early 1828, he destroyed the city and tore down its walls.

After the independent Greek state was established in 1830, Tripoli was rebuilt and was developed as one of the main cities of the Kingdom of Greece, serving as the capital of the Arcadia district. During the 19th and the 20th centuries the city emerged to be the administrative, economic, commercial and transportation center of central and south Peloponnese.